Gal Vihara (rock temple) is a 12th-century-place where solid rock melts and impresses! It's no surprise that the Rock Temple is a UNESCO World Heritage Site. And this testifies to Sri Lanka's outstanding rock cutting out of solid granite. The four Buddha statues, carved from a single enormous block, depict the Buddha's calm and sophisticated expressions and the elegant flow of the robes.

The carvings demonstrate the extensive use of natural marbling in the rock, highlighting its natural colors. The 14-meter-long reclining and the 7-meter-tall standing Buddha statues represent the Buddha's journey into Nirvana. 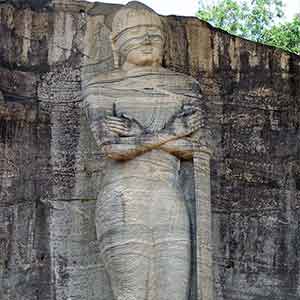 The Discovering of Gal Vihara and Its History

The Gal Vihara seems to have been mentioned in the Mahavamsa, or its part two, known as the Chulavamsa, of Sri Lanka's ancient history. The Culavamsa chapter was most likely composed during the reigns of Kings Parakramabahu I and Parakramabahu II of Polonnaruwa and Dambadeniya. The name given to the Gal Vihara in the chronicle is Uttararama, which means "Northern monastery." The name alludes to its current position in the northern section of Polonnaruwa, directly north of the major monastery complex, Alahana Pirivena.

According to the chronicle, the magnificent King Parakramabahu I is credited with being a passive and reclining Buddha of the Uttararama (1152-86). It does not mention a standing Buddha statue, which adds to some debate throughout the origin and identity of the Gal Vihara group's standing rock statue.

The Gal Vihara in Polonnaruwa represents a watershed era in Buddhist history. In many ways, the rock carvings are amazing. Though they have Mayanist elements, the reclining Buddha, in particular, is a new type of rock-cut Buddha. And this suggests a move away from the worship of supernatural, enormous Buddhas and toward the more human form of the historical Buddha.

The Gal Vihara sculptures, each unique in design, are unquestionably the finest examples of Buddha statues hewn from solid granite in Sri Lanka. All four sculptures emerge from the craggy eastern slope of a single enormous rock measuring approximately 27 meters in length and 10 meters in height. They are still in excellent condition.

1) The Statue of the Sitting Buddha Gal Vihara's enormous seated Buddha picture is 4.5 m (15 ft) high and sits in a large rock alcove, enclosed by a Torana, and on a low pedestal with panels depicting lion figures in the front view.

The sitting Vijjadharaguha sculpture is shown in the popular meditation gesture known as Samadhi Mudra or Dhyani Mudra. Both hands are on the lap, the right hand on top of the left, fingers completely extended. Siraspata is the flame-like emblem of enlightenment that sits on Buddha's head. A cave with pillars cut into the rock next to the enormous sitting Buddha is comparable to Buddhist cave temples in India. In the center of this semi-artificial cave is a second seated Buddha figure, its arms likewise in the Dhyani meditation posture.

The legs display the same "hero pose" known as Virasana as found on the bigger statue. The superbly carved figure is seated on a throne under a canopy, accompanied by a Torana adorned with deities, attendants, and mythological crocodiles known as Makaras. This 7-foot-tall historical Buddha statue makes an interesting gesture with its arms crossed in front of its chest. Because of this gesture, most tour guides think that this is not Buddha's picture but his favorite follower, Ananda, who is mourning for his teacher, who is dying away alongside him.

On the other hand, the significance of this enormous and yet quite beautiful rock monument is the subject of continuing debate. It most likely represents Buddha rather than Ananda.

4) The Statue of the Reclining Buddha The most renowned image of Gal Vihara is the 14m (46 ft) long lying Buddha from ancient times, representing his passage into the ultimate and eternal Nibbana (Pari-Nirvana.) The robes' liquid glide over the body has been highly appreciated.

Buddha's feet are adorned with lotus flowers and other fortunate symbols of monarchy or Buddhahood.

Best Time to Visit Gal Vihara, and How to Get There

July, August, and January are the ideal months to visit Gal Viharaya in Polonnaruwa, with little or no visitor activity in March. Polonnaruwa has a dry season from May to September, is often cloudy from June to August, and receives the most rain between October and December.

The distance between Polonnaruwa and Gal Viharaya is about 4.8 kilometers. Take the A11 (Colombo road) northwest toward Janapada Mawatha. Continue on the road until you reach Gallambarawa road.

The temple is a well-known religious landmark, and visitors must be respectful while visiting. Polonnaruwa is typically dry and hot, which is why sun protection gear is necessary. Don't forget to bring your socks! Because you must remove your shoes, you have to wear socks. The floor can get very hot. You must ensure that you have clothes that cover your knees and shoulders for religious purposes.